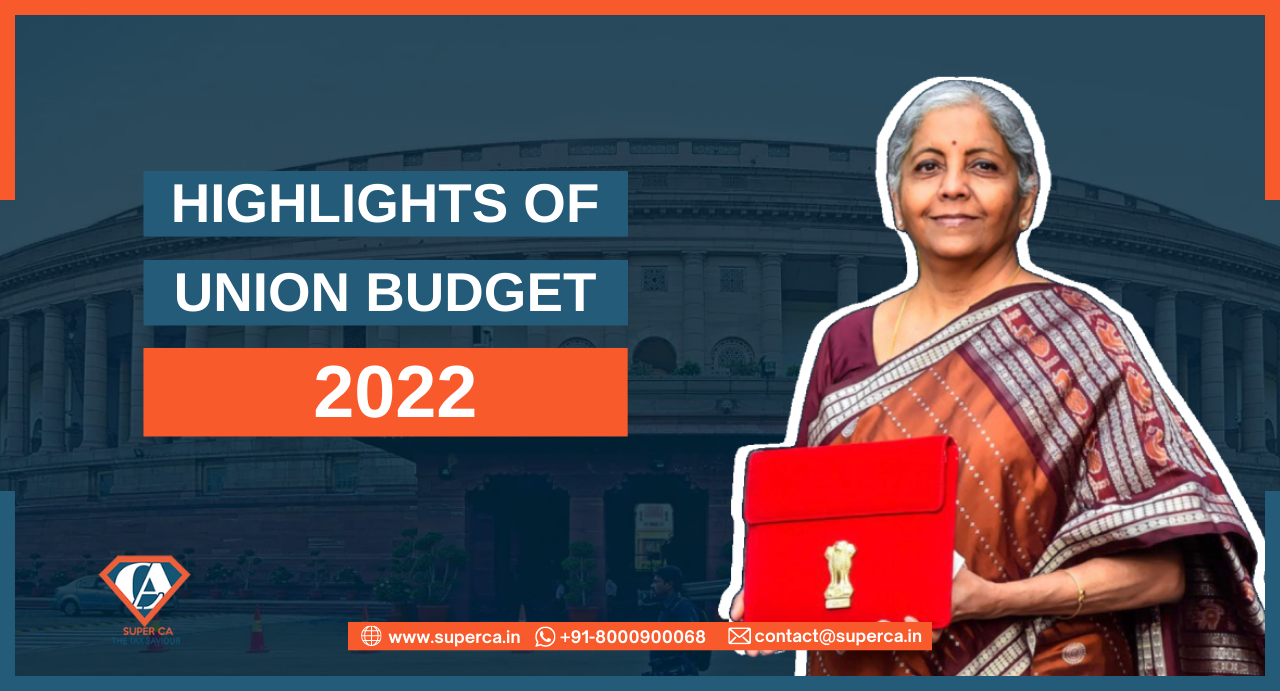 The Union Budget 2022 was proposed by the Finance Minister Nirmala Sitharaman this tuesday. This is her 4th straight Union Budget when she presents financial statements and tax proposals for fiscal year 2022–23 (April 2022 to March 2023). This year’s budget is said to have come as a disappointment to salaried taxpayers, as little to no changes were brought into effect in terms of income tax

Here are the highlights of direct and indirect tax proposals from Sitharaman’s Budget speech, and an explanation and analysis of it.

There were no major changes in income tax slabs in the Budget 2022. However, the government did allow a two-year window for taxpayers to correct their filings for a particular assessment year.

Government has proposed to provide a one-time window to correct omissions in income tax returns (ITRs) filed. Taxpayers are allowed to file updated returns within two years of the filed IT Return.

Introduction of RBI’s Digital Rupee and taxation of virtual assets

The government is launching the Digital Rupee — a central bank digital currency (CBDC) in the fiscal year 2022–23, and also impose a tax of 30 % on virtual assets. Losses from transfer of virtual digital assets cannot be set off against any other income.

Alternate Minimum Tax (AMT) paid by cooperatives have been lowered from 18.5 per cent to 15 percent for providing a level playing field between cooperative societies and companies.

Further, the surcharge on cooperative societies has been reduced from 12 % to 7% for those having total income between Rs 1 crore to Rs 10 crores.

The payment of annuity and lump sum amount from insurance scheme is allowed to the physically challenged dependent during the lifetime of parents/guardians i.e., on parents/ guardians attaining the age of 60 years.

Tax deduction limit has been increased on employer’s contribution to the NPS account of State Government employees from 10 to 14%, thus bringing them at par with the central government employees. It was said it would help in enhancing social security benefits. This won’t be available to non-government staff.

Extension of one year for the incentives provided to startups

The period of incorporation has been extended by one year, up to 31st March 2023 for eligible start-ups to avail tax benefit.

In order to reduce the litigation and the cost, budget has proposed a mechanism as per which, when in an appeal by revenue an identical question of law is pending before jurisdictional High Court or Supreme Court, the assessee can submit an application to the Revenue requesting not to file appeal. This will greatly help in reducing repeated litigation between taxpayers and the department.

Any cess on income and profits on health and education not eligible as business expenditure.

Underlining the existing ambiguity, Sitharaman said that set off, of losses, are brought forward against undisclosed income detected in search operations to avoid payment of tax.

Measures to facilitate domestic manufacturing of goods under Customs

The concessional rates have been gradually phased down on capital goods and project imports; and applying a moderate tariff of 7.5% which is conducive to the growth of the domestic sector and ‘Make in India’ aim.

Certain exemptions for advanced machineries that are not manufactured within the country shall continue.

Customs Administration of special economic zones (SEZs) to be fully IT-driven and function on the Customs National Portal. This shall be implemented by September 30, 2022.

Unblended fuel to attract an additional differential excise duty of Rs 2/ litre from the 1st of October 2022.

Various sectoral announcements were made on textile, electronic, chemical, and agricultural tools and other products.

The Customs duty rates will be fine tuned for providing a graded rate structure. This step will facilitate domestic production of wearable devices, hearable devices and electronic smart meters.

The Customs duty on cut and polished diamonds and gemstones will be reduced to 5%. Nil customs duty will be imposed on simply sawn diamonds. This will encourage the gems and jewelry sector of the country.

Further, for facilitating the export of jewelry through e-commerce, a simplified regulatory framework will be implemented by June. The Custom duty of at least Rs 400 per Kg will have to be paid on imitation jewelry import to disincentive import of undervalued imitation jewelry.

Further, Duty is being raised on sodium cyanide for which adequate domestic capacity exists. ‘This will help in enhancing domestic value addition.’said by the FM

Umbrellas saw a rise in custom duty to 20% with exemption to parts of umbrellas being withdrawn.

To tackle prevailing high prices of metal in larger public interest, certain anti-dumping and CVD on stainless steel and coated steel flat products, bars of alloy steel and high-speed steel are being revoked