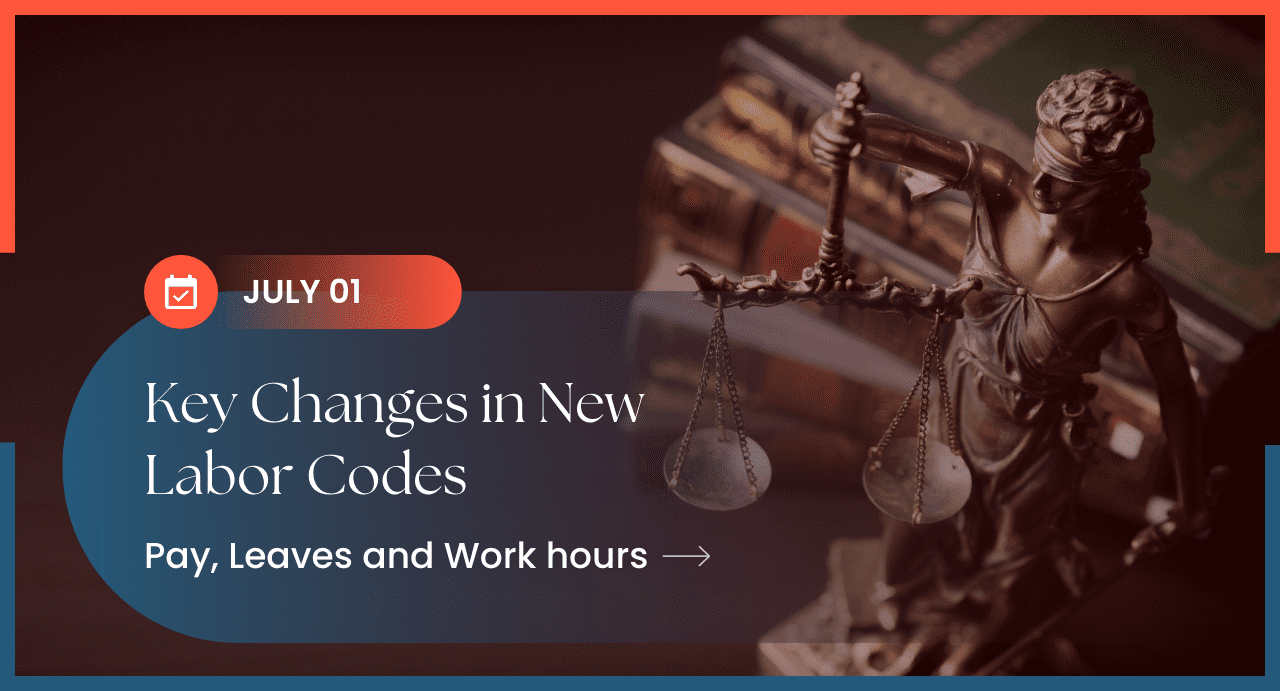 Recently, Four New Labor codes have been introduced by the Central Government that amalgamate and refine 29 existing laws. These laws dealing with wages, social security, industrial relations and occupational safety are expected to be implemented from July 1, 2022. Once the new codes are introduced, the employment sector will see a series of reforms pertaining to pay, social security, labor welfare, health & safety, and working conditions thus drastically altering the way industrial houses treat their employees.

The new code laws will apply to both organized and unorganized workers. Those engaged in the unorganized sector will be brought under the legislation by providing them with a Unique Account Number (UAN).

From working hours to in-hand salary, paid leaves, and several aspects of employment. Here's all you need to know regarding the changes that may come to effect from 1 July.

Back on September 29, 2020, the Center had notified four labor codes – the Code on Wages, Industrial Relations Code, Social Security Code and the Occupational Safety, Health and Working Conditions Code. They are set to replace 29 labor laws, which have remained unchanged since Independence. The same has already received the President’s nod.

However, states are required to notify rules under the four codes to enforce these laws in their respective jurisdictions. Only 23 states and Union Territories have published the draft rules under the Code on Wages. The codes will be implemented when all states are on board.
While the code on wages was passed in Parliament in 2019, the other three codes were approved by both the Houses last year. The Labor Ministry is now all set to implement the new rules under these four labor codes. These new labor codes will benefit employees categorized as ‘workers’.

Under the new rules, the definition of “workers” is similar to the definition provided under the Factories Act which states that a worker is “Any person (except an apprentice as defined under clause (aa) of section 2 of the Apprentices Act, 1961)1 employed in any industry to do any manual, unskilled, skilled, technical, operational, clerical or supervisory work for hire or reward, whether the terms of employment be express or implied.”

However, this does not mean the benefits are only applicable to blue-collar workers, who work in factories. The new labor codes will apply to all industries including the service sector and one every individual contributor.

The company has the freedom to divide the hours. For instance, a company can make its employees work for four, five, or six days, and accordingly divide the number of hours across the week. For example, a 12-hour working day across the week will lead to a four-day work week, reaching the 48-hour limit.

The minimum number of days of employment needed to qualify for leaves has been lowered under the new labor laws from 240 to 180. This means the new employees will be eligible to earn leaves after 180 days of employment instead of 240 days of work as is applicable now.

Earlier a new hire must work 240 days in order to be qualified to take a leave of absence. However, under the current labor laws, a new hire must only work 180 days before being eligible for leave.

The new rules mandate the base salary of workers to be at least 50 percent of their gross salary. This will lead to an increase in the PF contributions of both employees and employers.The gratuity and corpus paid to employees after retirement is likely to increase due to this but at the same time result in a reduction in the in-hand salary of workers.

The law states that the concerned company must have to pay the full and final dues within two days of the employee’s last working day after their termination of employment services for any reasons like resignation, retrenchment, and termination under the Code on Wages. Earlier, the complete settlement of salary and dues was given after 45 days to 60 days from an employee's last working day.

The new codes also allow an increase in the maximum number of overtime hours from 50 hours to 125 hours. This would provide businesses the flexibility to switch to a 4-day work week and, if necessary, hire people on the weekends.

There will be a consequent rise in PF contribution of the employee. But this is at the cost of a decrease in take-home salary, especially for those working in the private sector.

The quantum of leaves in a year will remain the same but employees will now earn a leave for every 20 days of work instead of 45, which is good news. When we talk about government jobs, an employee is entitled to thirty leaves per year and sixty leaves per year in the military.

The ‘Work From Home’ culture, which is a widespread market practice across different sectors, especially after the outbreak of the pandemic, has also been recognized by the central government in the draft model standing order applicable to the service industry. The new rules have been drafted to improve the well-being of employees which states that companies are required to have some basic principles in place regarding working from home and to ensure that employees’ work-life balance is not affected.

The new labor codes were released after working on it for several months. These laws aim to revamp the rules which recite the age-old relationship between employees and their employers. The newly prescribed labor codes lay down a host of schemes, under which there will be significant changes in terms of an employee’s salary, his/her PF contributions,  work hours, working conditions, welfare, health, and safety. Once implemented, it will make organizations across the country undergo drastic transitions.

These laws are in accordance with the changing labor market trends and at the same time accommodate the minimum wage requirement and welfare needs of the worker, especially in the unorganized sector, self-employed and migrant workers.